Click the links below to print the Flyer and T-shirt Order Form. We ask that all please practice social distancing and bring a mask to the event.

As you are all aware we were unable to hold our annual Lot Owner’s meeting on May 22nd due to the Covid-19 virus.

We have scheduled a meeting/get together, where no official business will be conducted, for Friday, July 3rd at 6 p.m. at the Shanksville Grove. If you plan on attending, we ask that you please follow all state and CDC guidelines for social distancing.

We will be discussing the following items at this meeting:

Update you on our water quality conditions

We hope to see you on the 3rd.

Thank you and enjoy your time on the lake this summer.

The SVDC Board of Directors

We wish to thank Sean Isgan and his family for hosting the 7th Annual Fishing Derby! Sean provided the following stats on the 2019 derby. Additionally, we would like to thank all of the sponsors (Photo below) as well as Snida’s Country Store. Congratulations to all of the winners!  The 2020 Derby will be the Saturday of Labor Day Weekend! 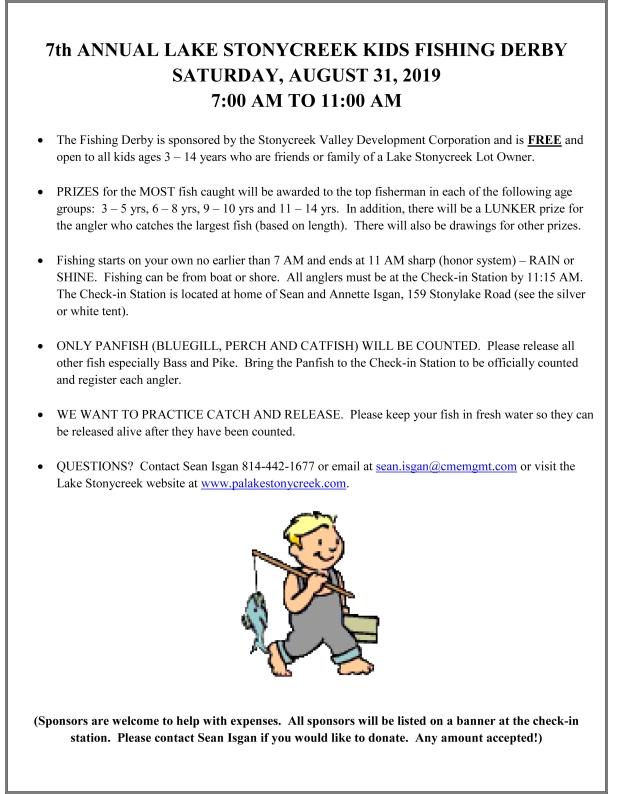 The SVDC Board of Directors has worked for over a year to try to get answers and to get help putting an end to the mud and silt coming into the lake from the fingers area. The Board is now asking for our help in this endeavor. It is felt that if our community makes phone calls en masse in the next week and files complaints, someone from one of the government agencies may finally listen and look further into what is going on and where the influx of mud and silt is coming from which turns the water brown after a rain.

When calling, some questions you could ask are: 1.) What is the source of the mud and silt coming into the lake from the fingers along Route 160? 2.) What is being done to mitigate and end the mud and silt laden water from entering Lake Stonycreek? 3.) Ask to file a formal complaint about the poor water quality and dirty water being discharged into the lake after it rains.

It is felt that one source of the muddy water is coming from the surface mining being done along Route 160 by Heritage Mining. The dirty water enters Boone Run which feeds into Lake Stonycreek. Another big source is The New Baltimore Sportsman Club. They clear cut their hillside 2 years ago for timber and there is considerable ongoing erosion on their property since the hillside was never stabilized after being clear cut. This mud filled water heads right down to the water that feeds into the lake.

The Department of Environmental Protection (DEP) is responsible for these issues. Please call DEP Erosion Control Officer Mr. Keith Largent at 814-289-4250 to file a complaint and ask questions. Keith Largent’s superior is Frank Calderone. Frank can be reached at 412-442-4318.

Another contact person would be the PA Department of the Environment Secretary, Mr. Patrick McDonnell. There is an online complaint form that you can fill out at this web address http://www.depgreenport.state.pa.us/EnvironmentalComplaintForm/

Please take the time to make some phone calls and file a complaint so we can hopefully get an end to the silt entering our lake. The health of our lake needs you. Thanks!

It is the hope of the SVDC that shareholders will give some consideration to donating their shares back to the lake community. The Board of Directors is offering a tax donation letter to those who generously invest in the community with their donation. If this is your plan, you may email the SVDC secretary Lynette Fleegle – lynettefleegle@gmail.com or call to request that the tax donation letter be sent to you at 814-442-4456. Let Lynette know how many shares you own, which she will verify, so that the letter can reflect the amount of your donation in dollars to satisfy the IRS requirements.  You may also send a request in writing to SVDC.

For those who would like to exercise the buyback option, the board will work on establishing a timeline and procedure to handle those requests at the next regular board meeting in June. The buyback request must be sent in writing and mailed to Stonycreek Valley Development Corp., P.O. Box 237, Shanksville, PA 15560

2) Meneilly’s motion of Enclosure B.
Voted by lots.
128 ballots were cast.
“YES” – 109 ballots, or 85% of ballots cast.
“NO” – 19 ballots, or 15% of ballots cast.
Meneilly’s motion passes, so a “Special Shareholders Committee” will be formed to undertake a comprehensive review of the SVDC’s current bylaws, etc.
3) Election of Board of Directors.
Voted by lots, with each lot allowed to cast a vote for up to 11 candidates.
113 ballots were cast out of a possible 263 lots, or 43%.

Other results:
Nominee Number of votes
Sheller 50
Fisher 50
Keyser-Coughenour 49
Jenkins 43
Warshel 39
Smith 37
Neel 35
Keyser 19
Mishko 17
K. Lazarowicz 14
D. Lazarowicz 10
Glotfelty 4
A personal note of apology from Rolf deVries, the chair of the election judges. I could have released the results a day earlier if I hadn’t messed up. When we finished counting votes on Saturday morning, we had a few questions of fact that I emailed to the board secretary as I was hurrying out the door to visit my son and his family near Annapolis, MD. I got the answers soon enough, but in my haste forgot to bring with me the ballots I needed to finalize the count so that our report could be accurate. I wrote this report when I returned home and was able to look at the ballots and finalize the count. I apologize for any inconvenience or stress caused by my mistake.

Congratulations to all Lot Owners! It was voted to become a one lot-one vote community at the Annual Lot Owner Meeting this evening.

The votes for the election of the Board of Directors is currently being verified and counted. An email of results will be sent out as soon as the results are available. The results will also be posted here on the website and on the Lake Facebook page. 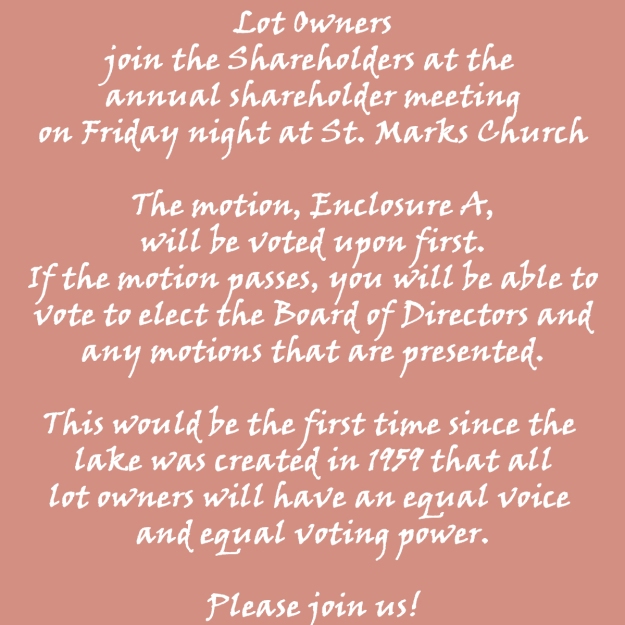 There have been many new families and members to our lake community in the last several years. The Stonycreek Valley Development Corporation (SVDC) realizes that many may not know the history of the SVDC and the significance of the stock/shares. The following is from the book The Lakes by James Mcintyre. Once the idea of building a dam and creating a lake took shape “the Stonycreek Valley Development Corporation was formed as a for-profit corporation.” Initially 5450 shares were issued. “The initial directors of the corporation, fifteen in number, were the original landowners. Various members acted as salesman and sold stock in amounts of 10 shares to their friends and neighbors. The concept of the corporation presumed that an annual service charge against lot owners of $1.50 per front foot for lake front property and $0.01 cent per square foot for non-lakefront property, the corporation could be a money earner.” The dam was built, and the land flooded for the lake in 1959. The stocks were linked to voting power. If you were not a stock owner, you could not participate in the voting at the annual shareholder meeting.

Fast forward to this year. There has been a fair amount of turmoil and animosity since the last shareholder meeting. There is a rift in the community. As happened in the early 2000’s, shares have been bought up. Currently, three people are majority shareholders as was described in the lake history. This means 2 -3 people can affect any vote despite what all other shareholders may want or vote for. The SVDC shares are dinosaurs from the for-profit days and create an inequality in our community. It has become apparent that, as in our democratic society, one vote per lot, is the equitable way for our lake community to be run. No one should have to purchase the right to have a vote and voice in our community at the annual meeting. No one’s vote should hold more weight than their neighbors when decisions need to be made and voted on and Board of Directors are elected. We are all lot owners and we all share the same great lake. We should share the decision making of our great lake equitably, one vote per lot, not by who can purchase the most shares/votes. This is how community Homeowners Associations work.

The mailing you received NOTICE OF ANNUAL SHAREHOLDER MEETING included an ENCLOSURE A, which is a motion to convert to a one lot – one vote system. It will be the first motion to be voted on at the meeting on May 24th. If the motion passes, all lot owners regardless if you own SVDC stock or not, will be able to vote on any other business presented at the meeting and on the election of the Board of Directors at this and all future meetings.

This motion (Enclosure A) includes a buy back of shares for anyone interested beginning June 1 through December 31. This motion, if passed, changes voting to ALL LOT OWNERS and eliminates shares completely.